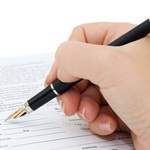 – is a document intended for the declaration in writing or electronic form of goods transported across the customs border of the state during export or import.

CCD is issued by the manager of the goods and certified by the customs inspector, in the future serves as the basis for passing through the border.

The declaration contains information about the cargo, its customs value, the means of delivery, the sender and the recipient.

It is issued on the forms of the established form “Transit Declaration (CD1 and CD3)” (main sheet) and the form “Additional Sheet (CD2 and CD4)” (additional sheet).

The CCD is the basis for paying for goods when importing to a supplier and receiving money from a buyer when exporting goods. The CCD is filed in the currency control of the bank where the transaction passport is open.

General provisions related to the filling of a Cargo Customs Declaration:

Cargo Customs Declaration is a set of four sheets CD1 (main sheet) and CD2 (additional sheets) – when imported into the customs territory of the Russian Federation.

And a set of four sheets CD3 (main sheet) and CD4 (additional sheets) – when exported from the customs territory of the Russian Federation. Information on goods contained in one consignment, which are placed under the same customs regime, may be declared in one CCD.

The sets CD2 or CD4 are used in addition to the sets CD1 or CD3, respectively, if information on two or more products is declared in one CCD.

In each of the sets of CD2 or CD4 information about three products can be declared. The number of sets CD2 or CD4 used in declaring a batch of goods is not limited.

One consignment is considered:

Set CD1 or CD3 is used to declare information about a single product. At the same time, goods of one name (trade, commercial name) are declared as one commodity and are contained in one consignment, assigned to one classification code according to the Commodity Nomenclature of Foreign Economic Activities of the Russian Federation (FEACN of Russia) and to one code according to the classifier of additional customs information (if in relation of the declared goods such a code is set), originating from one country or from the territory of one economic union or community, or whose country of origin is unknown, to the same conditions are applied for customs-tariff regulation and the application of prohibitions and restrictions, the size of rates of duties and taxes.

The goods specified in Appendix No. 1, placed under the customs regime of release for domestic consumption, are declared as one goods, if in addition to the conditions listed in the previous paragraph, the goods have one trademark, brand, model, article and have the same technical and (or a) commercial characteristics.

The CCD should be filled out using printers, legibly, not contain erasures, blots and corrections.

CCD must be filled out in Russian. Information used to individualize goods (trademark, article, model, etc.), as well as delivery condition codes, vehicle numbers, flight numbers, document numbers, and alike information, are indicated in the original language, including using the letters of the Latin alphabet.

When filling the CCD, an electronic copy is formed. At the request of the declarant the declarant can receive at the customs authority at no cost a software product that allows to fill the CCD and generate an electronic copy, or the customs authority provides a special computer on which the necessary software products are installed. In some cases, information in the CCD may be entered in capital block letters by hand, if the declaration of the goods with the filing of the CCD by the regulations of the Federal Customs Service of Russia does not establish the requirement to generate its electronic copy.

Over there you may also download electronic forms for filling the CCD.

LLC “Navigator Logistics “offers services for execution of the CCD for customers from any location in Russia.