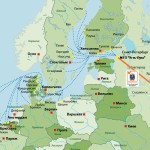 It was only yesterday that there were few people who heard about this port in the Baltic. It’s not surprising as it is the same age as our century. The title of the port title was awarded to Ust-Luga only in 2000, and it began its work in December 2001, when the existing forest terminal at the mouth of the Luga river merged with the new coal terminal.

Today, international shipping without Ust-Luga is difficult to imagine. Moreover, it picked off the honorary title “Sea Gate of Russia” from the northern capital. At the end of 2014, Ust-Luga with a freight turnover of 72.6 million tons took the lead of the “big three” Baltic ports, outrode both, the Big Port of St. Petersburg (61.1) and Primorsk (53.6). In 2016, the cargo turnover of the port of Ust-Luga amounted to 93.4 million tons.

The port achieved such success due to set of conditions, both economic and geographical. Ust-Luga actually share borders with EU and is located at the crossroads of international transport corridors.

The natural conditions of the Luga Bay, located in the west of the Gulf of Finland, allow the port to operate year-round (with a short ice period: up to 326 days a year – without the use of icebreakers). Other advantages include a deep harborage area and a short sea channel, that allow Ust-Luga to receive vessels with a deadweight of 160 thousand tons, which no other Baltic port of Russia is capable of.

The port belongs to Kingisepp customs and has an office for excise goods.

The largest shipping lines make vessel calls in Ust-Luga, such as:

But not only the availability of modern moorings provides the successful functioning of the port. It makes no sense to deliver goods by sea without a developed land transport infrastructure.

The most important role in the port is played by rail freight. Today, three of the seven stations of the Luzhskaya railway hub are already operational. The railway approaches to the port along the line Mga – Gatchina – Weimarn – Ust-Luga are being strengthened, which will make it possible to bypass the overloaded St. Petersburg railway junction.

In the future, the Ust-Luga port railway complex should become the largest and most modern in all of Europe. From the cargo traffic of 180 million tons per year, expected when the port reaches its full capacity (by 2020), about 100 million tons will be delivered to and from the port by rail. Already this year the throughput capacity of the port’s railways should exceed 50 million tons.