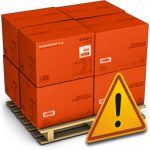 Dangerous cargoes are substances that pose a hazard on health, safety, property or environment during their operation and/or their transportation. They are divided into classes on the basis of the specific chemical properties of the substances that constitute a danger.
Important: Not all countries use absolutely identical images (label, image and/or text) in the internal rules of transportation of dangerous cargoes. Some countries use graphic symbols without inscriptions in English or with respective inscriptions made in a national language. Before transportation it is necessary to read dangerous cargo transportation rules effective in the territory of country you are interested in.

Compressed, refrigerated liquefied and dissolved under pressure gases meeting at least one of the following conditions:

Flammable solids and materials (excluding those classified as explosives) which, when transported, are readily combustible by external ignition sources as a result of friction, moisture absorption, spontaneous chemical transformations as well as while heating;
4.1 Flammable solids which are readily combustible by a short time impact of external ignition sources (sparks, flame or friction) and are capable of active burning;
4.2 Spontaneously combustible substances which are liable to spontaneous heating and combustion  under ordinary conditions of transportation;
4.3  Substances which emit flammable gases.

Oxidizing substances and organic peroxides which are capable to emit oxygen, to contribute to combustion, and as well, under respective conditions or in mixture with other substances, to cause a spontaneous combustion or an explosion;
5.1 Oxidizers which by their nature are not flammable but they contribute to combustion of other substances and emit oxygen  when burning, thus increasing the intensity of fire;
5.2 Organic peroxides which in most cases are flammable, can act as oxidizers and interact dangerously with other substances. Most of them are easy to inflame and are sensitive to a chock and friction.

Toxic and infectious substances, capable to cause death, intoxication or disease if swallowed or inhaled or by skin or mucous membrane contact;
6.1 9 Poisonous (toxic) substances, capable to cause intoxication if inhaled (vapors, dust), swallowed or by skin contact;
6.2 Substances and materials, containing  pathogens, dangerous for people and animals.

Substances with a relatively low risk during transportation which are not classified to any of the previous classes, but require application of certain transportation and storage rules;
9.1 Solid and liquid combustible substances and materials, whose properties do not let refer them to the 3rd and 4th classes, but under certain conditions they can be fire dangerous (flammable liquids with a flash point range of 61 C to +100 C in the closed crucible, fibers and other similar materials);
9.2 Substances becoming caustic and corrosive under certain conditions.